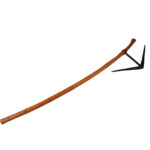 Tonga / BaTonga Ceremonial Axe
0 out of 5
( There are no reviews yet. )

The Swazi Battle Axe, (isizeze) was reserved primarily for royal officials. However, today we can see the swallow-tail axe by mostly royal warriors (lijaha) at ceremonial dances at the incwala ceremony or Umhlanga or Reed Dance ceremony, an annual Swazi and Zulu event. This Battle axe symbolizes status rather than a fighting weapon.

Actually, both Kingdom of Eswatini (Swaziland) and Zulu kings are often seen holding the “swallow-tail”  battle-axe at special ceremonies. As such, it’s fair to call these axes ceremonial or prestige tribal weapons

According to eSwatini culture, when the owner dies, normally the wooden shaft would be broken at the grave. Then the son will use the blade to make a new axe. Source: http://vikingsword.com/vb/showthread.php?t=2989

This swallow-tail axe is hand-forged, with an angular iron axe blade with long integrally forged round-section stud mortised into the haft and firmly secured with twisted iron wire.

Be the first to review “Swazi Battle Axe” Cancel reply