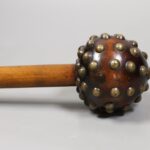 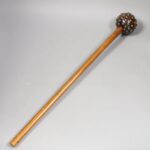 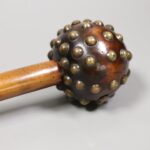 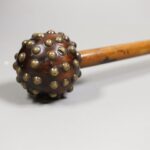 Knobkerries were an indispensable weapon of war both in Africa and abroad. In Africa, the weapon found particular use among Nguni peoples. Among the Zulu people, they are known as iwisa. The iwisa was not typically used in combat – though they were occasionally used as thrown weapons in place of the throwing spear or isijula. Instead, the Zulu used iwisa as swagger sticks, ceremonial objects, or even as snuff containers. In the 20th century, the Zulu nationalist movement Inkatha viewed iwisa as traditional weapons and lobbied for the right to carry such weapons in public- https://en.wikipedia.org/wiki/Knobkerrie

This knobkerrie type is extremely rare. They were typically was used for execution. It has earned a code name Mfecane II here at Hills Collectibles, take a look at its cousin Mfecane I. The shaft has a beautiful honey maple tone and the globular head has deep rich chestnut colored hardwood, with an aged patina. The globular head consists of several studs. This type of knobkerrie was typically carried by high status Zulu warriors. Scratches, dents to some studs consistent to its age and use. A Must Have for a serious collector.

Genuine, 19th-century prestige knobkerries like this have become highly sort after artifacts. African ethnographic tribal artwork  value is typically based on some of the following criteria with the help of an expert:

Finally, to fully appreciate ethnographic tribal art, one has to have a sound understanding of African cultural history. Feel free to ask any questions here