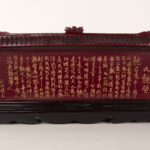 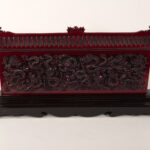 Chinese Terracotta Wedding Dolls – Scrolls Inscribed 百年 and 好合
0 out of 5
( There are no reviews yet. )

The Prestige Souvenier is inscribed with the story about the so-called 九龍壁 – Nine-Dragon Wall or Nine-Dragon Screen.

The most significant Dragon walls are in the Forbidden City, Datong, and the Northern Sea, which is collectively known as the “Three Nine Dragon Walls of China”.

is also known as the Winter Palace, it is a public park and former imperial garden located in the northwestern part of the Imperial City, Beijing. First built in the 11th century, it is among the largest of all Chinese gardens and contains numerous historically important structures, palaces, and temples.

Datong Dragon Screen Wall is sited in Heyang Street in downtown Datong, Shanxi Province China.  different Chinese dragons. Such walls are typically found in imperial Chinese palaces and gardens. The screen wall is a Han Chinese traditional architecture wall in a mansion for blocking the line of sight, not only to protect privacy but also to showing auspicious blessing.

To the Chinese, dragons and even lions are a symbol of auspiciousness, bravery, and power. Because of these qualities, dragons were placed in front of palace walls and mansions to guard against evil.

Hand sculptured in rich dark dense traditional Chinese Red Resin with black base. It is very heavy and almost impossible to pick up from its case with just one hand.

Similar cloisonne nine dragon wall souvenirs were once presented to leaders of foreign countries as a noble gift.

The inscription basically describes the nine dragons, their significant role in Chinese culture (see above), and that all Chinese are descendants of the dragon.

In untouched excellent condition, it is only the original box that shows signs of wear commensurate to age.