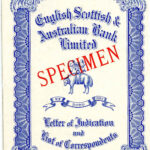 Bank of Canada Specimen Banknote Set
0 out of 5
( There are no reviews yet. )

A circular letter of credit was a letter of credit issued by a bank or related financial institution to a private person, usually an individual of means, which enabled that person to draw funds from correspondent banks while traveling. This was considered safer than carrying large sums of cash. Early examples of the use of personal letters of credit can be found as far back as the Renaissance and they became more standardized by the latter half of the 18th century. Circular letters of credit were widely used until the 1970s. However, with the advent of modern electronic banking and ATMs they have largely fallen into disuse.