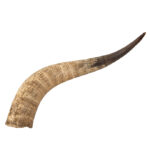 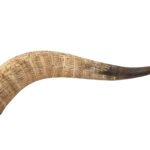 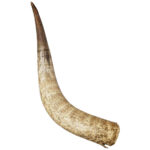 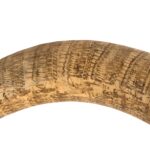 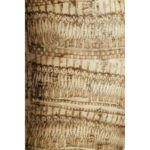 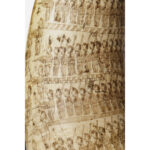 Rare 19th Century Prestige Zulu Knobkerrie
0 out of 5
( There are no reviews yet. )

Provenance: German Market,  (private collector) – NOT subject to the Act on the Protection of Cultural Property Act – KGSG. In addition, NOT subject to CITES regulation (cattle horn), therefore can be legally traded or exported.

African tribal artwork is fascinating, invigorating, and often thought-provoking.  African tribal art has been gaining an unprecedented interest world-wide among scholars, art collectors, museum curators, and even the corporate world. This recognition and appreciation of African art emerged around 2000, as we saw a spike of African art featuring at auction houses across European and American markets. Some of the high sort artifacts are antique Dogon doors, Zulu weaponry,  Shona art, various Congolese artwork, animal horns, only to name a few.

Talking about animal horns, many people might be unfamiliar with rare and unique types of horns that have recently gained popularity. This refers to the engraved 19th Century Cattle Horns of South Africa. Now as much as it sounds new and unusual, back in ancient times, engraving horns was a form of art and a quality skill used for gun powder or snuff containers. Various artists practiced horn engraving skills at that time. However, not many are aware of this unique artistic founding of ancient times, since it was present in limited museums.

What Kept Them Unpopular?

For someone wondering why these creative horns had not gained popularity earlier, it’s due to the un-publishing of five engraved horns. These horns were a part of the earliest collection of the Natal Museum in Pietermaritzburg. The engraved cow horns depict the Anglo-Zulu wars of 1879 (Battle at Isandlwana, South Africa). However, after the publication of a paper in 1990 regarding the representation of African colonial life; these horns got more recognition. In Tim Maggs’ paper titled “A glimpse of colonial life through Zulu eyes: 19th century engraved cattle horns from Natal, he describes the cattle horns for the first time in a publication. Some years later Dr. Patricia Davison a research associate (Iziko Museums of Cape Town), wrote another interesting paper about these engraved horns.

According to Maggs, three horns had different engraved art on them. Two of these had engraved military scenes, while the third one was placed with motifs and their visual content. During this time, only three engraved horns were discovered. But a few years later, a variety of comparable pairs of such horns were found in the British Museum and the Smithsonian Institution’s collection. Moreover, the examination of each of these horns determined that the same artist engraved them – except the exceptional one in the Natal Museum.

Advanced research and studies on the images on these engraved horns determined that they were the visual narratives – encountered between British soldiers and Zulu regiments. This was mainly a part of the Anglo-Zulu War held in 1879 and its other surrounding events.

Interestingly, a few of these horns ended up in private collections after being auctioned at The Colonial and Indian Exhibition of 1886 in London England. These were collected as objects of curiosity, rare artwork you would expect to find perhaps at a private Medici’s Galleria, maybe at the Hapsburgs Kunstkammer or even at the Waddesdon Manor? There are only a few owned mostly by museums and in private collections.

Details of the Horn Engraving

The vignettes portray a visual narrative of Anglo-Zulu wars of 1879 with a remarkable unique and detailed making too. This includes the smooth scraping of the horns surface for an even background. Additionally, the fine lines of the engravings ensure that a very sharp blade or a fine point was the tool used here.

Some other detailing on these engraved horns includes:

This horn is a treasury of beautifully crafted images consisting of unique engravings and extreme detail that portray colonial life; these horns are surely an attractive addition for the museums that appreciate either British and African history or enthusiasts of the same interest.

Special thanks to Dr. Patricia Davison for her assistance and academic work on Engraved Cattle Horns, 19th C. SA.