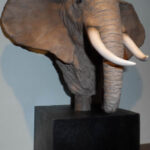 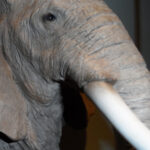 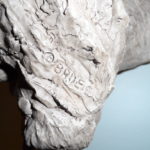 Shona Ceremonial Prestige Staffs / Scepters Gano / Tsvimbo
0 out of 5
( There are no reviews yet. )

Made originally out of clay the Faces of Nature Elephant was produced originally by Sandicast out of cast stone from their headquarters in San Diego USA.

Today, they are produced like most other animal figurines overseas where production costs are lower. For Sandicast collectors, however, having one of the originals made in the USA is the goal and carries with it a much higher future collector value. This is especially true upon closer analysis of the Sandicast Elephant Figurine realistic detail. Somehow, Sandra Brue was able to capture all the wrinkles, folds and coarse texture of the elephant’s skin. It is easy to forget that the Elephant figurine statue is actually made of cast stone and not an actual elephant.

With it’s mounting on the black pedestal the Sandicast Elephant Faces of Nature Statue receives it’s due in prominence while at the same time remaining discreetly in the background. As with all animals, figurines’ quantity is limited to production runs. With its retirement by Sandicast inventory only remains in-retailer stock or with online animal gift specialists such as Anwo.com Animal World. As a special gift for yourself or for the elephant animal lover the Sandicast Elephant Faces of Nature Statue would make a very special present. Description adapted from animal-figurines.blogspot.com

Be the first to review “African Elephant by Sandra Brue: Faces of Nature” Cancel reply