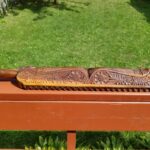 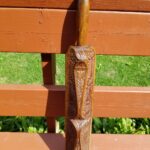 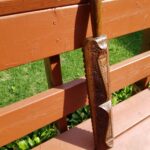 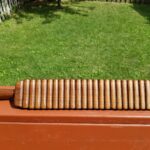 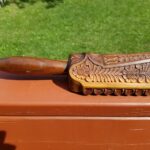 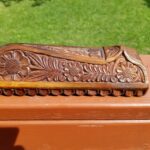 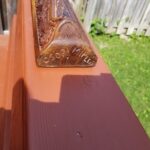 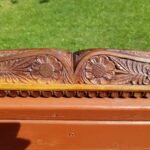 This attractive mangle is made of very dense wood, designed to impress at first sight with beautiful patina. The overall condition is excellent, with typical museum qualities.

The mangle is cross ribbed on one side and has an ornate floral decoration on the other.

The mangle board was popularly given as a courtship or betrothal gift initials and dates by the young men of Scandinavia or the Netherlands for their sweethearts.  The tradition was for the suitor to carve the board then hang it outside the house of the girl he wished to marry.  The more elaborate and ornate the carving on the board was meant to show how well set up he was.  If the intended bride then took the offering into her house, he could consider himself engaged. Subsequently, the board carried into the home of the newly married.  If she didn’t, her would-be suitor would have to start again with a new board to tempt someone else.  After the marriage, perhaps the board acted as something nice to look at while engaged in the daily drudgery of doing the laundry! (museumsnorthumberland.org.uk)

In the 19th century, these boards were used with wooden rods to smooth wrinkles out of fabrics and to beat down the woven fabric into a linen-type texture.

A long rod that closely mimics an elongated rolling pin was tightly wrapped with sprinkled linen which was placed on a flat table. The companion mangling ~ board, a narrow flat piece of wood was then rolled vigorously back and forth on the fabric with as much force as possible, over this roller until the fabric was smooth. The carved, bumpy surface of the board helped to soften the cloth. Mangles were also used as washboards for scrubbing smaller garments and served as feather bed smoothers as well (fanaticscountryattic.com).